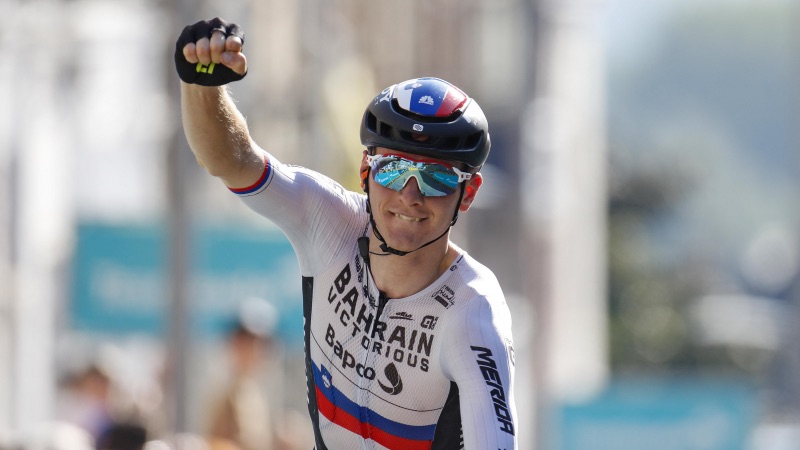 Bahrain-Victorious lived up to its name in the 2021 Benelux Tour. Matej Mohoric won Sunday's seventh and final stage, teammate Sonny Colbrelli was second and secured the overall win.

The 181,8km closing stage between Namur and Geraardsbergen included three passes on the iconic Muur van Geraardsbergen and the Bosberg. After a tough Saturday stage in the Ardennes, Sunday's tailwind was welcomed by the peloton, which covered nearly 51 kilometres in the first hour.

It took until the start of the first lap of the local circuit in Geraardsbergen for a breakaway to form, with 11 riders gathering a one-minute lead. However, on the first ascent of the Muur van Geraardsbergen the race was shaken up by a fierce attack by Kasper Asgreen, who was joined by Matej Mohoric, Victor Campenaerts and Brandon McNulty.

The quartet joined the leading group and left them behind on the next passage on the Muur. Pöstlberger soon joined, forming a definitive five-man leading group. They quickly increased their lead to one minute, after which attacks from Campenaerts and Mohoric caused McNulty and Pöstlberger to drop. Going into the final lap Asgreen, Campenaerts and Mohoric were also caught by the chasing group.

Mohoric was not deterred however, and placed another attack on the third and final climb of the Muur. Asgreen, Wellens and Mohoric' teammate Colbrelli responded, but didn't manage to catch the Slovenian.

Mohoric rounded off an impressive solo in Geraardsbergen, while overall leader Colbrelli joined Tom Dumoulin in a counterattack to safeguard his overall win. With a second place finish on Sunday the Italian champion did exactly that, capping off a glorious day for the Bahrain-Victorious outfit.

Colbrelli is the first Italian overall winner of the Benelux Tour, with Mohoric and Campenaerts joining him on the podium. By virtue of his sixth place in the final stage Danny van Poppel snatched the points jersey away from Tim Merlier. Arjen Livyns won the Super 8 Checkpoint standings.